Following on a previous post about how well (or poorly) the Integrated Engineering intercooler performs when paired with a hybrid turbocharger this post looks at a specific example to examine what is being described as “poor” performance.

To not cause controversy by posting vehicle data generated by others I will be referencing the pertinent information.

The vehicle is accelerated at full throttle from what looks to be 1st through 5th gears, the data screenshot does not indicate gear, this sequence of gears is estimated based on RPM pattern.  The vehicle accelerates at full throttle through the gears and the intake air temperature is reported in fifth gear at approximately 6,000 RPM.  The reading is approximately 30 degrees over ambient.

The question then, is that poor performance?  To the person posting the data it was.  When asked about what the expected result was the answer was “single digits” above ambient.

Is single digits over ambient after a WOT 1st through 5th pull at 34 psi of boost a realistic expectation?  Making some estimates of the temperatures and efficiencies involved can give some clues.

To estimate the temperature exiting the turbocharger compressor housing the BorgWarner website has a handy tool called the MatchBot. Conditions can be entered and the application will estimate the compressor outlet temperature.  Two case were entered in the bot in columns #5 and #6, shown below: 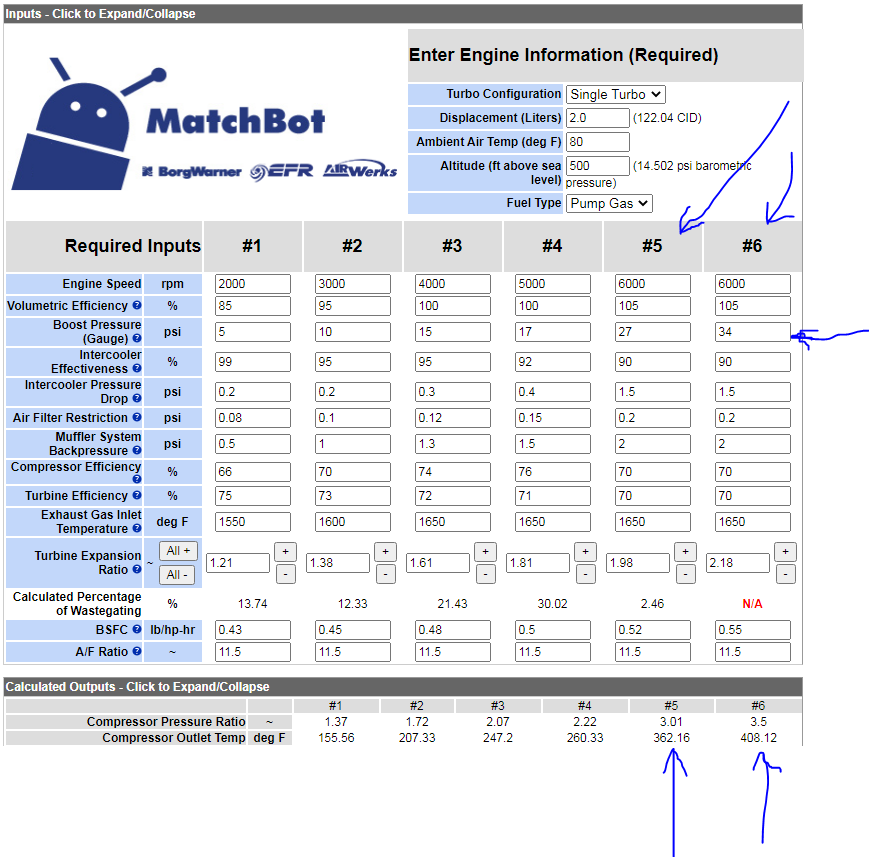 One case is at 27 psi and the other 34 psi.  The 27 psi case is chosen to check the accuracy of the Bot, I’ve recorded compressor outlet temperatures from the IS38+ turbo and they reach approximately 350F at 27 psi, shown below:

MatchBot results look close to actual and therefore looking at the data in column 6, for the hybrid turbo at 34 psi, might give a good estimate of the hybrid’s outlet temperature.  In the case of 34 psi of boost pressure the estimated outlet temperature is 400 degF.

Something to note is that the data recorded of the IS38+ is of a single third gear pull.  The hybrid turbocharger is accelerating through 1st, 2nd, 3rd, 4th, and 5th gears and likely by the end could be generating higher output temperature than predicted.

Turning back to how the IE intercooler performed, at the end of the pull IAT was approximately 30 degrees above ambient.  Intercooler efficiency can be calculated by taking the temperature drop across the intercooler, from the inlet to outlet, and dividing that by the maximum possible temperature drop, which would be to ambient temperature.

In this case the IE intercooler drops the charge air from 400F (estimated) to 110F, a 290 degree drop in temperature.  This is 91% efficiency from the intercooler.

To reach single digits above ambient, the expectation of the owner, the temperature would need to drop from 400F to 89F, a 311 degree drop in temperature for an efficiency of 97%.

The question now becomes, how realistic is a goal of a 97% efficient intercooler?  The Bell Intercooler Frequently Asked Questions page addresses intercooler efficiency:

Based on the information from Bell Intercoolers the IE intercooler appears to be performing very well already.  Achieving 97% efficiency seems optimistic.

Even with some uncertainty about the accuracy of the estimated result it does not appear that the IE intercooler is performing poorly in this hybrid application.