While making a list of some aftermarket airbox options that are available for the Mk 7 Golf I came across this APR product advertisement that caused me to pause for a moment. 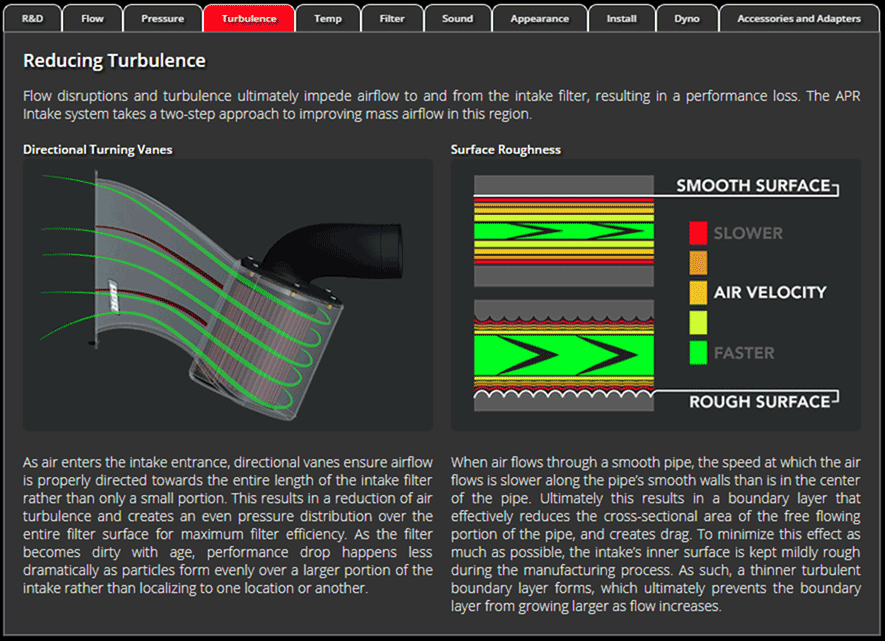 The title states “Reducing Turbulence”, and continues on to explain that “flow disruptions and turbulence ultimately impede airflow… resulting in a performance loss.”

Fair enough, that sounds reasonable, but what made me stop and think was the description of what they did with “surface roughness”.

Breaking it down sentence by sentence:

“When air flows through a smooth pipe, the speed at which the air flows is slower along the pipe’s smooth walls than it is in the center of the pipe.”

This is true, in fact there is a condition called “No-slip” that describes what occurs at the object surface, the fluid sticks to it, zero velocity.

“Ultimately this results in a boundary layer that effectively reduces the cross-sectional area of the free flowing portion of the pipe, and creates drag.”

The word ‘ultimately’ is unnecessary, a boundary layer begins to form at the location where the airflow first contacts the object.  Because of the “No-slip” condition the diameter through which air is moving is effectively reduced and frictional drag results, this is often called “skin friction”.

Now it gets interesting:

“To minimize this effect as much as possible, the intake’s inner surface is kept mildly rough during the manufacturing process.”

Say what?  They are intentionally manufacturing a rough surface for air to pass along as it goes through the intake?  How is this going to reduce friction drag?

“As such, a thinner turbulent boundary layer forms,”

No.  Disrupting the airflow in excess of that produced by a smooth surface is not going to result in a thinner boundary layer.

“which ultimately prevents the boundary layer from growing larger as flow increases.”

Somebody made a mistake in the design concept for the intake.

Somebody went and did the opposite of what they should have if the goal was to minimize drag forces through the intake inlet.

As a practical matter the impact on the airbox performance is probably minimal.  The intake is not very long and almost certainly is drawing in turbulent airflow to begin with.