For the past couple of weeks I’ve read statements that the Integrated Engineering intercooler does not work well with hybrid turbochargers.  This claim is puzzling to me based on how well the product has seemed to perform after several years in use.  Products like intercoolers don’t perform in a step function manner; good w/ IS20, good w/ IS38, good w/ BT, bad w/ hybrid. Note: This assumes the hybrid is well designed and operating within the design envelope.

I went on a search to find if there was evidence showing the IE intercooler not performing well.  My questions for data led to a Facebook group where I came across the claim being made. 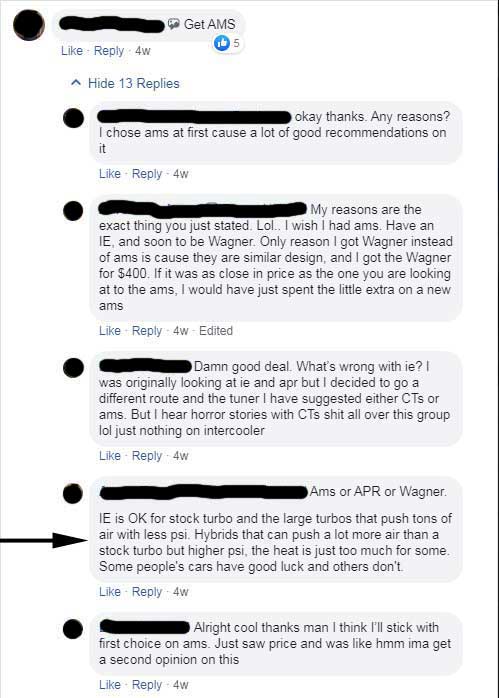 This explanation did not add up and I asked about evidence demonstrating the claimed poor performance. 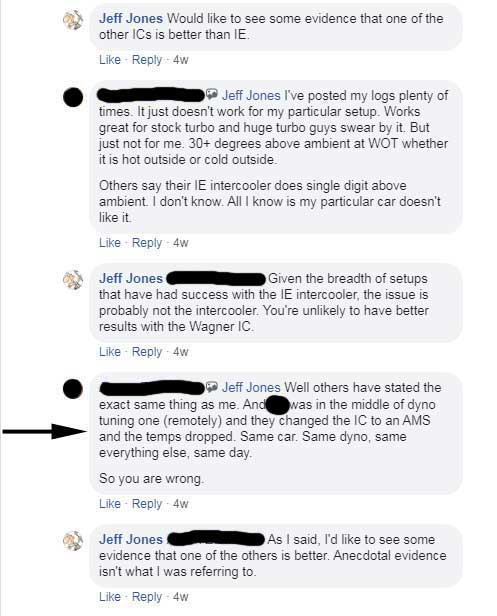 Well that didn’t answer the question, but I did get a clue to help with the search.

A little more digging produced the information that was being referred to. 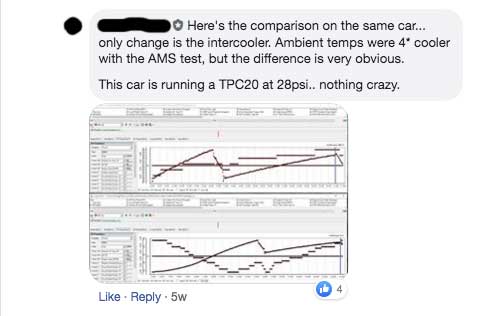 Finally some data to weigh the claim against!  The charts above are enlarged and shown below:

Suspecting this is not a comparison of data collected under like conditions I looked more closely.  It became evident that the time period over which the data was recorded differs significantly.  In order to compare the data from each product it is necessary to normalize the time scale so that each log starts at time zero and to overlay the data series.  The results of these adjustments are shown in the chart below.

There are two differences that stand out, labeled (1) and (2) in the chart.

(2) Points out the difference in times over which cooling data is recorded for each intercooler.  The IE intercooler is subjected to a temperature load for 76% more time, 22 seconds versus 12.5 seconds, than the AMS IC.   The importance of this difference is that the longer an intercooler is subjected to a heat load the more reserve it has to absorb heat energy is used up, and eventually the cooling efficiency decreases.  A good comparison would subject both intercoolers to the heat load over a similar period of time.

The data provided that purports to show that the Integrated Engineering intercooler performs inadequately is not credible for the comparison being made.