Occasionally an interesting discussion will pop up on a car forum where a claim is made that is worth taking a closer look at.  Such a topic arose concerning the point of greatest restriction in an intake and the affect on overall system performance.

What stood out in one post was a claim that for a well designed intake system, aside from the point of greatest restriction at the intake port, the remainder of the intake would cause zero flow loss to the intake port, and consequently the engine.

Because zero loss would be remarkable I asked for more information.  That request was dismissed and the poster failed to provide any evidence in support of their claim.

I decided to test the theory to see if a real intake system would behave as claimed.

The discussion involved a generic system from the airbox to the cylinder head.  The fact that the Mk7 uses a turbocharger would dramatically alter the airflow from airbox to engine thus I chose to look at the pre-turbocharger half of the Mk7 GTI air intake system.

The test would consist of checking the airflow through the components in three stages:

Prior to taking airflow measurements a calibration check was performed on the flow bench.

Having verified that the readings from the bench are accurate an APR turbo inlet elbow is attached to the bench via the compressor housing adapter, shown below:

Because a turbo inlet elbow does not function without something attached to the inlet, and in fact not having anything in place will cause reduced performance, a funneling inlet was placed at the entrance of the TIP.

The APR TIP with funnel was flow tested and the measurement recorded was 390 CFM @ 28″ of H2O.

Next the Airbox and Intake Hose were attached to the flow bench via an adapter, shown below, and the same measurement was taken.

The stock Airbox setup without the TIP produced an airflow reading of 543 CFM @ 28″ of H2O.

The measurement from the Airbox/Inlet Hose is 153 CFM more than the APR TIP flows at the same pressure drop.

This represents 39% greater airflow through the Airbox/Inlet Hose than the APR Turbo Inlet Pipe at the same test pressure. 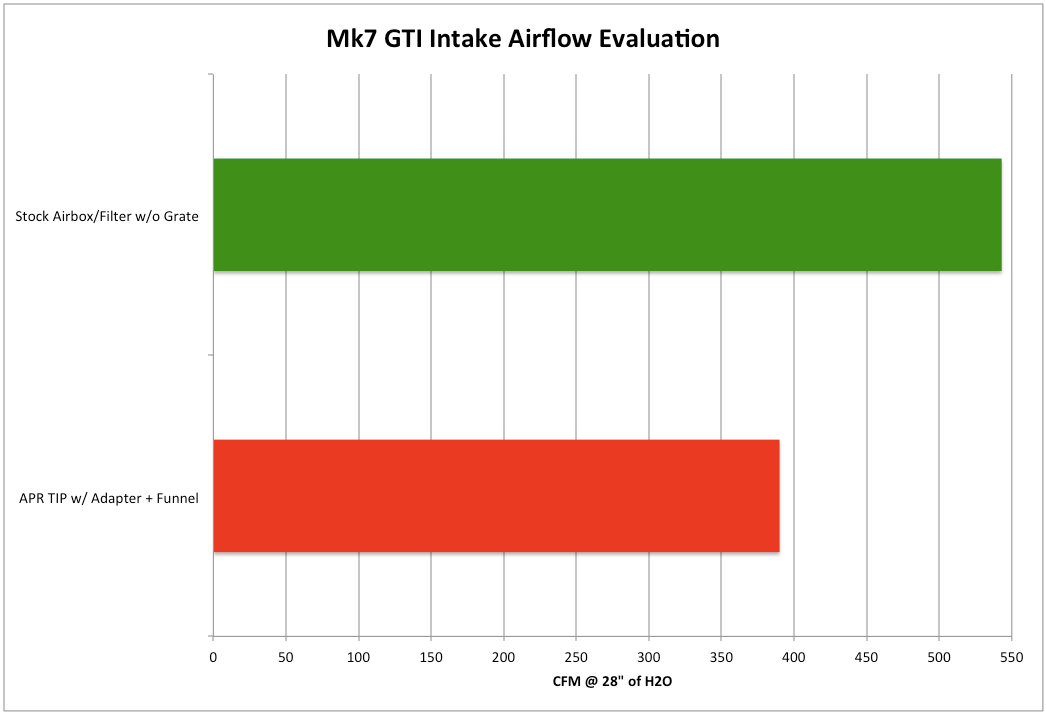 Last came the step to bring the components together and determine the validity of the claim that the flow through a restrictive intake port would not be lowered by an intake system that flows more than the intake port.

The two halves were combined to determine the overall system flow.  The result was a measurement of 350 CFM @ 28″ of H2O.

This is a 10.3% reduction in airflow through the intake system compared to just the APR TIP.

By attaching the higher flowing Airbox/Inlet Hose to the lower flowing APR TIP the airflow through the entire system was reduced 10% below what the most restrictive part flows.

Based upon these results, the claim that the intake port flow will have zero flow loss when a high flowing intake appendage is added is false.