Bench testing results of the Unitronic, AMS Performance, and most recently Forge Motorsport intercoolers raised some questions, as well as statements, about the testing method.

One particularly broad statement was “This is good and all, but has little basis in reality.”

I provided the contributor with some reasons for the method being used in the bench test and asked him to contact me.  He never did contact me so I decided to reference Sam’s comments to discuss a few points about the intercooler bench testing, and testing in general, to explain the reasons for this particular test method and try to clear up misunderstanding other people might also have.

The product being tested during the bench cooling test is an intercooler, a particular type of crossflow heat exchanger.  The purpose of the device is to transfer heat between two fluids (air in this case) at different temperatures separated by a solid barrier.  Hot air from the turbocharger passes through the intercooler and transfers heat into the intercooler core by convection.  Then conductive heat transfer occurs through the charge row walls to the core fins, and then finally the heat is removed from the core fins by convection with the surrounding air.

The goal of using an intercooler is to remove a maximum amount of heat from the charge air so that cooler, denser air, exits the part.

The bench test simulates the heat transfer process of hot air flowing into the intercooler and the heat being transferred out into the surrounding ambient air, so that cooler air exits the intercooler, but under different conditions than occur on the vehicle.

For the bench test a pair of hot air sources flow heated air through the intercooler continuously.  The core fins are exposed to the atmosphere to allow heat to exit the core.  At a predetermined time air surrounding the intercooler is pushed through the core by a fan to increase the rate of heat transfer from the intercooler.

Understanding the function and mechanism of a cross flow heat exchanger (intercooler) along with how the test simulates the heat transfer process, I don’t believe there is a valid basis for the statement questioning the “reality” of the test.

Perhaps “little basis in reality” was an effort to say the test does not simulate an operating automobile?  While that is not the purpose for the test, I looked for a situation during driving that mimicked the bench cooling test.

I was able to find a recent datalog that shows a situation similar to that of the bench cooling test.

Shown on this chart the GTI is cruising at 40 mph.  Outside air temperature is around 82F and the temperature exiting the turbocharger is between 120-130F.  No boost pressure is being generated while cruising.

This situation was found to occur several times during the drive.  In this next example the air temperature exiting the intercooler has been added to the chart.

To recap the situations shown in these two examples:

The two driving scenarios shown above were not hard to find in data logs that I have recorded during routine driving.  Stopping for traffic control devices is a common occurrence for me and because of that the bench cooling test is relevant to how I operate the vehicle.

Understanding the similarities between the driving situation and phases of the bench cooling test I don’t believe there is a valid basis for the statement questioning the “reality” of the test.

The last point is about testing.

Previously I’ve addressed differences in test objectives and why they matter.  The bench cooling test has a specific purpose and it is not to attempt to replicate the conditions on the vehicle.  The bench test is being conducted to improve the likelihood of conducting a successful test on the GTI.

Sam did not continue to discuss his concern about the test so there have been no suggestions for possible ways to improve the test, or to clear misunderstanding Sam may have about the test purpose and limitations.

It’s no surprise that comments from the peanut gallery comprise a large portion of any discussion on a Facebook group.  In this instance, if Sam is who his profile says he is, it might have been worthwhile for him to stick around longer and help the group. 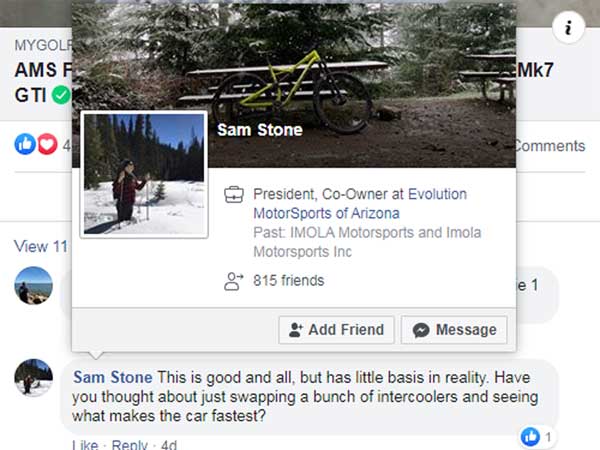